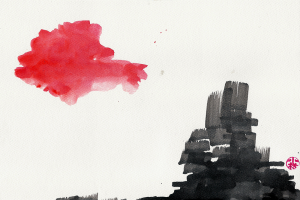 “Cloud and City” by Lydia Komatsu

Longtime readers of this blog know that I wrote a series of posts about my time in Japan following the 11 March 2011 earthquake and tsunami. What you might not know is that I repurposed those posts into a seven minute oral essay on my experiences for the “Arctic Entries” storytelling event here in Anchorage. If you’re not familiar with Arctic Entries, it’s similar to NYC’s “Moth” as means of continuing the oral storytelling tradition. Seven storytellers get seven minutes (max) to tell one story a piece, on stage at Anchorage’s Performing Arts Center, in front of a couple hundred friends.

A friend recommended me for the December 2014 event, themed “Thicker Than Water,” and once accepted, I got to work writing a draft. I had this idea that I could somehow take twenty pages of material drafted for a new, unfinished, essay and turn it into this brilliant seven minute, fragmented story that would bounce around between various memories and wow the audience. After seven minutes of pugilistic story telling, I’d drop the mic and walk away to thunderous applause.

Drafting proved problematic. First, the draft was ten pages. Way too long. Then, I realized I had no idea how to tell a story with little regard for chronology without running the risk of completely losing the audience. I quickly abandoned the latter tack. But I still had the problem of length. On average, it takes about a minute to read (aloud) a page of double-spaced, 12-pitch font. At my first rehearsal, my story ran seventeen minute. That’s 7 + 10 if you’re a Humanities major like me. Not good.

Thematic control is so important to any short piece, and I had a hard time deciding what the story was about. Was it about being half-Japanese? Was it about losing my grandmother in the tsunami? Or was it about what I did or did not do as a part of the relief effort?

By my second rehearsal, the story was shaping, but still three minutes too long. So I flogged that pony some more, telling it over and over again, while Jen timed me and gave me feedback. The night before the event, I stood in the living room and told it once last time for the night: eight minutes. At least I was getting closer. At one point in the night, I ranted to my wife about the difficulty of condensing all this material down inside such a short timeline. The intro was taking far too long, and I felt like I was getting bogged down in the details. Frustrated, I gestured and whisper-shouted to avoid waking our son, when Jen stopped me.

“Wait, what did you just say?”

I paused, then tried to say it again, something about walking into my office, looking up at a tv, and watching Japan die.

“That’s it,” she smiled, “that’s your opening. One sentence that puts the audience exactly where you want them.”

The next day, I kept at it until about an hour before the show to ensure my timing was good, that I had a good handle on the story’s roadmap. You’re not allowed notes or props while telling your story, and I didn’t want to end up lost on stage, gaping through the silence into the dark. My last time telling it to Jen, I got it done in a shade under seven minutes, and I’m happy to report  that on stage, I made the time limit. You can listen to the story, recorded live, below.