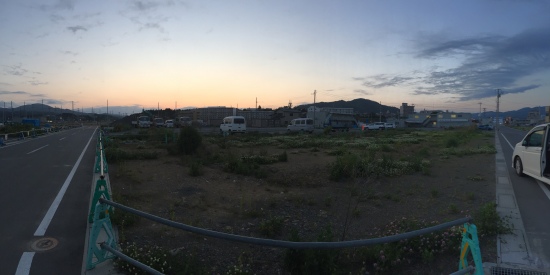 This vacant lot was the site of the home my father grew up in.

I began writing about 3.11.11 nearly four years ago exactly. It was late in the spring of 2014, and I’d just begun a three-year Master of Fine Arts in Creative Writing through the University of Alaska. The program there is a low-residency format, which at UAA translates to one semester of online followed by a two-week residency, then two semesters of correspondence with an assigned mentor. It was at the end of the online period, with the residency approaching that I tackled the problem of producing manuscripts for workshop during the residency.

How I decided on the tsunami as an essay project is now lost to me. I’d posted a few times about the tsunami in 2011-2012, but incompletely. More than likely, it was feedback from an Academy classmate named Brandon Lingle, who’d stumbled across the posts and recommended I pursue further writing. That in combination with the requirement to produce a couple dozen pages probably made the idea of repurposing existing material attractive.

So I wrote an essay for workshop about the tsunami. And it was an absolute mess. Eva Saulitis, whom has since passed away, gave me feedback during the actual workshop, which turned unexpectedly emotional for me. Eva wanted us to read a selection before falling silent to receive feedback, and tears came unbidden as I read, out loud for the first time, what I’d written. My vulnerability did not spare me tough feedback; I still have Eva’s handwritten notes on that draft and while they are kind, they are also clear.

In the years since, the essay has lain fallow on my computer. I’ve pulled it out from time to time to work on for short periods. But I was troubled by my inability to speak from firsthand experience about Kesennuma. When I was here in 2011, I was able to travel no further than Sendai, still a few hours south.

Over the past two years, I’ve read everything I could about the tsunami. Watched the videos. Clicked on the pictures. Set Google Alerts for breaking news stories. Pored over imagery from Google Earth, scrolling overlays from pre- to post-tsunami. But I was never able to find the exact site of my the family home I recalled visiting in 1988, 1997, and finally in 2005.

And now, I’m here. In Kesennuma. My feet touch the same places, but the land has changed. It was lowered by the quake, erased by the tsunami, then razed and raised in order to reconstruct. The places I remember, all gone.