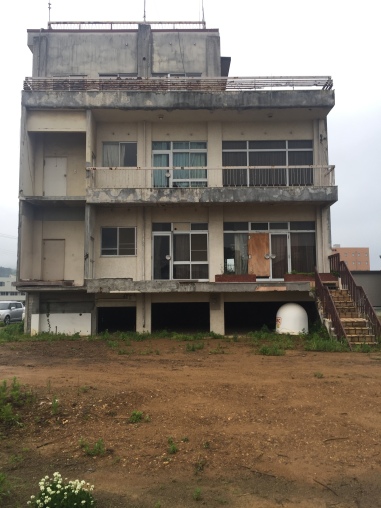 A building that survived the 3/11 tsunami in Kesennuma. If it looks strange, it’s because the quake dropped the land in this area by a full meter+. Reconstruction has required filling the area back in to bring it up to sea level.

For those who were following my posts from Japan earlier this year but don’t follow me on social media, my first two stories have posted. The first is a feature for VICE that looks at human fallibility in the face of disaster, and the second is the story of that peculiar stone in Yoshihama I blogged about during the trip. Of course, if you want to see both in one place, you can just visit my Pulitzer page.

It’s of course gratifying to see the stories publish and I remain indebted to the folks who got me to this place. But as a writer, it’s also hard to know what the impact of your stories is. You don’t really know who’s reading them, or whether they make a difference. Even knowing if they rise above the constant deluge of information is impossible. It would honestly be lovely to know, but that’s not why we write. At least, that’s what I remind myself once a story is published. I wrote these stories not because I felt like there was anything in the here and now that pegged their importance, but because they gnawed at me personally and caused me to dwell on one sliver of the human condition.

The crazy thing about these stories is that in the sixty days that have elapsed since I left Japan, two more disasters have struck Japan: a torrential downpour that caused landslides and flooding, and a deadly earthquake near Hokkaidō.

So, I suppose there is a bit of timeliness to what I’m writing after all. I’m wrapping up a third, and maybe final story from my Japan trip. Onward, as they say.