Ahhhh. The training. I love it, I hate it, I love it and hate it all at the same time. I love it for what it provides, but I hate it for the suffering it inflicts.

My take on training starts pretty simply: do it. Training is what gets us from here to there. It’s the one thing you can control in the process, really. You can’t control how you feel, your luck, or the genetic coding your parents passed along. Training is the one thing that not doing guarantees failure.

My second foundation for training is consistency. In his classic novel Once A Runner, John L. Parker Jr’s character Quenton Cassidy talks about a concept called “The Trial of Miles, Miles of Trials.” I think it accurately depicts the concept and importance of consistency. The miles required to achieve the goal, the sum itself is a challenge and opportunity for victory. In the same way, each one of those miles is its own little challenge and victory once completed. It’s a day in/day out  commitment to put numbers in the mileage box of your training log, and watch as those numbers add up over weeks, months, even years depending on what you are trying to achieve.

Consistency is also perhaps the most difficult aspect of training to achieve, especially with life’s standard infringements. Work demands are my primary enemy when it comes to consistency. Having spent about six of the past twelve months on the road, I understand first hand the difficulty of staying on schedule.

My last, equally important approach to training is the importance of quality work. Quality work is what you might think of as “sprints,” but you might want to re-categorize as “anything harder than just going out for a jog/run.” This, combined with regular old running is what makes a program, and achieving goals requires both. Track intervals, fartleks, hill repeats, sustained moderate/hard runs…it’s all deadly.

Beyond the foundational tenets of doing the training, doing it consistently, and doing the quality work, there is the issue of methodology. I think of methodology as how you put it all together into a cohesive training program. There are many, many ways to train. From the ubiquitous cookie-cutter programs available on any online running website, to systems devised and led by individual coaches; there are simply a ton of options. I can find it a bit overwhelming, to tell you the truth.

is starting to fall apart from me paging through it constantly. It’s in-depth as well as simple, and includes recommended training plans for runners of all abilities and distances. I also inject some of Michele’s workouts, which she took from Alan Storey. Unfortunately I don’t have any resources for him, which is unfortunate due to the fact that he’s got some killer hard workouts.

There are several others out there I trust. Mark Twight’s stuff on www.gymjones.com is pretty much my sole resource for strength these days.

Chatting with Coach Jay at the 2010 Chicago Marathon Expo

He tells me that he’s working a research project on strength for endurance athletes, which I eagerly await. Additionally, Coach Jay Johnson, www.coachjayjohnson.com, has some wonderful stuff both on his website and in the podcast videos on www.runningtimes.com with regards to building a strong body capable of handling the toll running can take.

Lest I totally geek out, I’m not going to get into the details of my training right now, since I could go on forever. I will say that I’m currently focusing on trying to run 16:30 for 5k by the end of Jan. As such, my training is focused heavily on shorter, faster intervals with some sprinklings of the moderate sustained work. I will also say that I stay very flexible due to my travel schedule.

Here’s a depiction of the four weeks of training done prior to this week:

As you can see, I do 2-3 quality sessions a week, usually Tue/Thu/Sat in order to give me some recovery in between. I’m running higher mileage volume and long runs than is typical for most 5k programs, but I’m doing that to see how I react to sustained higher mileage.

Alright, that’s it for today. Like I said, if I get going into the science stuff, you’ll be here (and bored) all day. Check out some of the links for more information if you’re interested. Hope you found all this informative…in the future I will probably post some of my own recommended training plans.

“ON YOUR LEFT!” I find myself running sideways trying to slip past the guy with no concept of someone trying to pass on his left, and our shoulders collide as I pass.  “On your left means on your left,” I gasp as I haul ass past him, leaving out a long list of choice pronouns I’d like to tack on to the end of that sentence.  The issue at hand is that the front of the Governor’s Cup 8k pack  is running into the back of the Governor’s Cup Half Marathon. The races share the same course for the first 2+ miles, and the race direction started the 8k a scant ten minutes after the half-marathoners took off.  Now I’m bobbing and weaving through the crowd, just hoping this isn’t going to slow me down.

There’s one guy ahead of me, and he’s far enough out of my league for me to not even think about him. He’s a local masters runner who’s allegedly been training only a few weeks now, but that’s what he always says before he shows up and throws down a 15 minute 5k. Anyway, I dropped the only other guy around 1.5 miles, which was disappointing because I was hoping not to run solo for the back half of the race. But, here I am again in no-man’s land with only myself for a pacer.

After we break from the half-marathon course, everything falls strangely silent. There are no spectators, no nothing at this point. At Mile 3 I hit my watch and don’t like what I see: 12s slow for the last mile. This is the point in a race where I struggle the most. In the past, I might have simply packed it in, and given up any hope of running near my goal. But I’ve worked very hard on my mental game in the past couple years. I tell myself it was a slow mile as a result of all the bobbing and weaving. I know the next mile is all flat/downhill, so I decide the best thing is to push the next mile very aggressively. 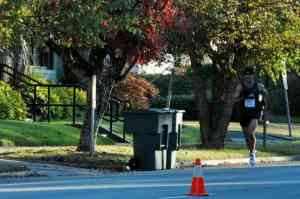 Rebounding after a slow mile...

Shortly after this, I see Jen, who has borrowed a bike and is riding around snapping pics of me and our friends Matthew and Steph Whitis, who are both running the half.

I can’t resist smiling even as I focus on going 20s faster this mile.

My watch at Mile 4 shows a 5:20 split, which puts me back on track to finish in the upper 27s for 8k. I’m back where I need to be, and to tell the truth, feeling pretty good. I’m working very hard, but think I can probably maintain this pace over the next mile.

There are now some scattered spectators as I draw closer to the finish. Then I see it: the half-mile uphill standing between me and the finish. It doesn’t look that bad, I think. But as I begin my ascent I quickly find my stomach growing more and angry at the amount of growing acidity in my body. Uh-oh. Red-line City.

Then begin the crippling dry heaves.

I feel my pace slipping.

The grade slackens, but I am suddenly overcome by an overwhelming urge to stop and throw up. At this point I feel like I am crawling.

Don’t you stop. You want to throw up, fine. But you’re at least going to be moving when you do it So I keep moving, making awful gagging sounds and faces.

About 100m out, in sight of the finish line, all the spectators, and most importantly, the race photographers, the gig is up. And so is whatever’s in my stomach, which thankfully isn’t much.

I manage a semblance of a sprint, and cross the finish in 28:12, happy to be done with it.

In retrospect, it was not a bad race. It highlighted some weak areas in my training, and as my first race in five months, not a bad start. Most important for me was the lesson of mental tenacity. Being alone out there in a race when things aren’t going as planned is a tough spot. Ten years ago (a decade? Has it really been that long?) the demons would have been in charge. As a collegiate runner, my number one struggle was my head and overwhelming negativity. More than likely, I’d have mentally quit and coasted the remainder. This time, though, I fell back on some tried and true techniques – positive mental chatter and form cues – to help get me back on track. Unfortunately, my fitness level wasn’t quite on par with the course demands, but that’s an easy fix: train harder. On a humorous note, check out http://orders.racephotonetwork.com/QPPlus/Images.aspx for some funny pictures of me in the middle of the dry heaves both on the hill and approaching the finish.

As for the results, I was second overall, first in my age group, and the proud recipient of a $55 check. The time was also *technically* an 8k PR, although I was faster in the first 8k of the Reedy River 10k back in Feb.  In the half, my friend and training partner Matthew Whitis (the dude in red next to the handsome gent in blue ) ran away from the field in 1:14 and finished first, which was awesome.  Over the past year, I’ve trained with Matthew more than any one person since running in college. We do most of our long runs together and occasionally help each other through some of our quality sessions. He’s getting ready for the Rock n’ Roll Phoenix Marathon in mid-Jan, and I expect he’ll be one of the top masters there. The dude eats high-mileage weeks for breakfast, logging 100-120 with complete nonchalance. When I start to think my mileage numbers are a big deal, all I have to do is ask Whitis what he ran last week and I get an instant ego check.

Since the race, I’ve increased both my mileage and intensity. Hill repeats, track intervals, mixed tempo sessions – “It’s all deadly,” to quote a favorite movie. I’m hoping I can break 17:00 before Christmas, and looking at a fast 5k in Greenville on 23 Jan as being a good place to target 16:30.